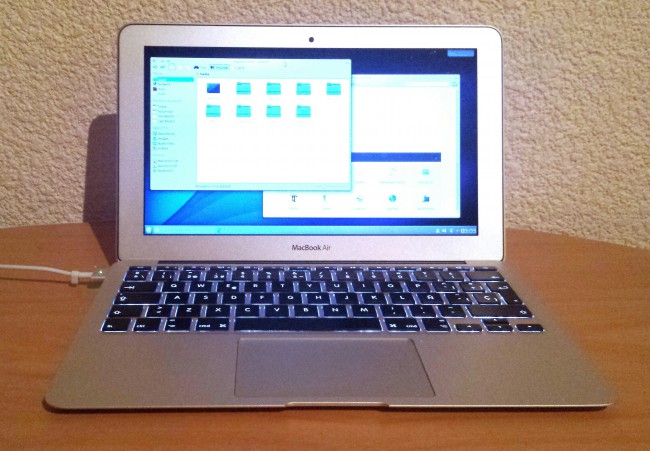 Apple’s ubiquitous Macbook Air line has become synonymous with lightweight, portable and yet relatively powerful computer, the latest version is Apple’s attempt at making it a synonym of all day battery life. Thanks to Intel’s amazing new Haswell architecture achieving over 9 hours of battery life is feasible on laptops. The 11.6″ Macbook Air is in my opinion a very interesting proposition: Is not a lot bigger than an iPad, but is way more functional, has a proper keyboard, and the battery life is actually better than it is on the tablets if you limit yourself to iPad-like tasks. The question is: How well does Linux runs on it?

I won’t waste too many lines describing the design or hardware of the Air, as that has been done countless times on the web, let’s take a brief look. The build quality is outstanding, the unibody aluminium chasis feels very premium, while doing intense tasks it gets warm at the bottom but no uncomfortably so. The trackpad is the best in the industry, only matched by the one in its bigger siblings or the Chromebook Pixel, the backlit keyboard is very comfortable despite the F keys being smaller. You get two USB 3 ports and one thunderbolt port. Inside there’s a new Intel Haswell-ULV at 1.3 GHz, Intel HD 5000, 4GB of RAM, WiFi 802.11ac, Bluetooth 4.0, and all the usual stuff. The only component that is really subpar is the screen. Instead of putting an IPS LCD Apple has gone once again with a TN Panel, meaning it has comparatively bad viewing angles, worse, the resolution is pretty low, the density isn’t the biggest issue, the real problem is the lack of vertical resolution, on the other hand it gets pretty bright and color reproduction is decent and vibrant, compared to say the screen on the Yoga 11S it has a much lower resolution, worse viewing angles and lacks vertical space, on the other hand, scaling on Linux isn’t anywhere near perfect and things look very tiny on the Yoga 11S, colors are washed too and brightness is pretty low, so it isn’t as simple as it may look on paper. All in all, the only component that Apple should have really changed on its new Airs are the screens, that said, the screen may be the reason behind the Surface Pro 2 lasting less with a bigger battery than a Macbook Air 11.6″, despite both shipping with an Intel Haswell processor.

Linux on the Air, hardware compatibility.

Installing Linux on the Air isn’t as straightforward as in other computers, but doing so isn’t terribly hard either, we covered that recently. Perhaps surprisingly you only need one proprietary driver, the Broadcom STA wireless driver, something you can select during the installation of Ubuntu 13.10 based distributions. Almost everything works out of the box, including the microphones, the camera though simply does not work.

One thing I immediately noticed is how off the colors were compared to OS X, fixing this is pretty easy, just replace Kubuntu’s default color profile with Apple’s, this can be done by going to System Settings > Color > Add Profile > From file…, then importing Apple’s profile from /Library/ColorSync/Profile/Displays on Macintosh HD, then click again on Add Profile and select Color LCD from Available Profiles. Sadly sleeping and resuming don’t work correctly, if the brightness was low when the lid was closed it will come back with 0% brightness and even if you can successfully write your password brightness still doesn’t work correctly, you can set brightness to 0 or 100 percent, nothing in between. I’m testing a few settings to see if I can workaround this, but so far, no success, hopefully this will get sorted out in future releases.

The backlit works perfectly. The keyboard was not correctly mapped by default though, I had to go to System Settings > Input Devices and select Apple/ MacBook/MacBook Pro, then switch tabs to Layout, tick Configure Layouts and add mine, which is Spanish, that said there’s a very curious bug, the keys marked in the following picture are completely swapped: The trackpad only works with up to three fingers using Linux which isn’t much of an issue (unlike OS X, Kubuntu doesn’t make use of any fancy gestures), much to my enjoyment you can enable middle click simulation by using three fingers something I haven’t been able to set on Mac OS X (I didn’t look with much care either) by going to Systems Settings > Input Devices > Touchpad > Tapping > Tapping with three fingers > Middle mouse button, I also prefer natural scrolling on the touchpad, oddly the only way to change it is to go to Mouse and select Inverse Scrolling, the implementation on Linux isn’t perfect as it has some weird tiny side effects, for example, scrolling to turn up the volume is also reversed. One thing that truly bothered me was the total lack of palm rejection, you can mostly fix this by disabling the touchpad while you type, this option exists but for some reason it isn’t displayed on KDE’s System Settings, instead you need to open Synaptiks (you can use search) and select Automatically switch off touchpad on keyboard activity, and set a waiting time: Subjectively performance is good, boot time is around 20 seconds, including the time it takes to write my password. Kubuntu is vey responsive and fast (unlike Unity, which feels a tad slow and unresponsive), scrolling on Chrome and Firefox (especially on the latter) is fairly smooth, although none of them is as smooth as Apple’s own Safari, they seem to be mostly on par with Chrome and Firefox under Mac OS X. KWin and Compiz run for the most part without hiccups too. One of the big changes brought by Haswell is improved graphics, the Air comes with Intel HD 5000 which should be considerably faster than what Ivy Bridge had to offer. CPU performance is improved too, but not by much and Intel’s strategy was clearly reducing power consumption as much as possible without sacrificing speed, the new Air runs at a lower clock speed than last year’s model, but the performance is for the most part on par. Haswell is a new architecture and is really only supported from Linux 3.11 onwards, we can expect further improvements with Linux 3.12 That said, right now, Gzip compression is way faster under OS X: I wouldn’t worry much though.

This is undoubtedly the biggest selling point of the new MacBook Airs, Apple claims up to 9 hours of wireless web browsing , that’s a conservative estimate, especially since the release of Mac OS X 10.9, the 11.6″ Air is perfectly capable of hitting higher numbers, easily crossing 10 hours, and even getting up to 11 hours as long as you don’t do anything too intensive, i.e. if you’re using it like a tablet you can expect battery life as good or better than most tablets. This is a remarkable achievement by Intel, the Air has a smaller battery than the iPad and yet can surpass it in battery life, granted, the screen isn’t a high-res IPS display but the processor isn’t an ARM mobile processor either.

This, of course, doesn’t mean it will always last 9 hours or more. The 10-11 hours of battery life are only possible if you’re really only doing light web browsing as you would on an Android tablet or an iPad, with somewhat heavier usage, you can get around 9 hours, which is probably the kind of workload Apple is using for its estimate, i.e. you can expect 9-11 hours if you’re using your computer as a glorified typewriter and a web browser (the rather big range depends on how fast you’re switching sites or whether you’re browsing flash-heavy ones or not). If you put it under more pressure, say, you have countless of tabs opened, you’re switching constantly between them, listening to Spotify on the background, typing, watching videos, in other words if you’re not giving the processor much time to go to idle, a safe estimate is about 7 hours. If you’re really using the Macbook Air and putting it under some stress (playing a few games from Steam, downloading files from the web constantly, listening to music, compiling some code, and browsing the web) battery life will be around 4 to 5 hours long, which is insane considering the mid-2012 model had an estimate of 6 hours of web browsing battery life.

Can Linux match these numbers? Under heavy loads Kubuntu 13.10 and Mac OS X 10.9 don’t behave too differently, this is to be expected, the software has very little influence on such circumstances, the SOC isn’t getting as many chances to go to idle, therefore is safe to say that it can get very close to the OS X’s 4 to 5 hours of heavy usage. The rest is a different story, the upper bound I’ve gotten from Kubuntu isn’t nowhere near the 11 hours I can get from Mavericks, instead is a very respectable 7 hours, this may seem disappointing yet I’m sure is more than what I would get using Windows 8,  the Surface Pro 2 from Microsoft has a bigger battery and according to most reviews it lasts around 6.5 hours. Apple is doing all kind of tricks to keep energy consumption down that neither Kubuntu or Windows are doing, on Kubuntu’s case there’s also the fact that sometimes drivers can be subpar thanks to crappy support from manufacturers (e.g. wireless drivers).

Is the new Air a good machine for Linux enthusiasts? That’s hard to answer, many other devices have gone Haswell, but very few, if any, have the balance of build quality, battery life, keyboard, trackpad, weight, design and thinness of the MacBook Air. Moreover, if you like to know what the competition is up to, you can only run all three major operating systems legally on a MacBook or iMac.

Ultimately I think the mid-2013 11.6″ MacBook Air is a fantastic machine, its size is almost tablet-like but its power is thankfully not, battery life running Linux  is 7 hours, while that falls short of “all day battery life”, is nothing to be ashamed of either. Almost everything works out of the box, if you don’t mind the TN Panel the Air is hard to beat, is a beautifully crafted machine and Linux looks good on it, if you’re looking for an ultraportable worthy of the name there’s not many computers than can claim to compete with it. If you want a touchscreen though, or stylus support or you want a crazy hybrid computer or a high resolution screen then the Air won’t meet your needs.

If you just want to take your favorite Linux distribution with you, without a carrying a charger, without compromising much on power and without hurting your back, I can wholeheartedly recommend the Air to you.