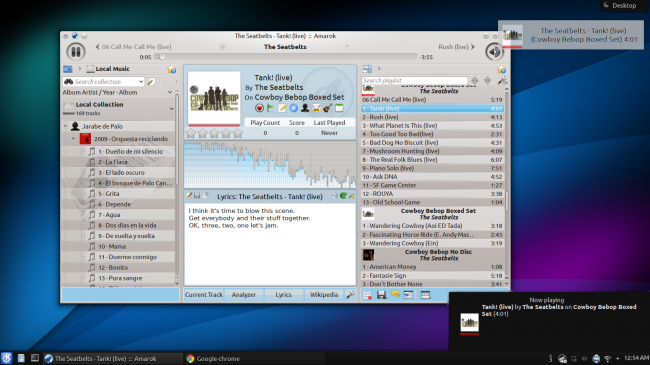 Once upon a time Linux had what I think was the best music player/manager, its name was Amarok and people even brought it up as a way to try convince others to move to Linux, intelligent playlists, auto fetching of cover arts, lyrics, last.fm integration, etc, and it was great. Fast forward a few years (almost a decade to be fair) and now Amarok and all KDE music players seems to be lacking, with KDE 5.0 maybe this is the time to fix it.

Look at the following picture. Is super cluttered, but what always catches my attention first is the amount of album arts, is worth mentioning that Amarok 2.x has improved in this regard (there used to be more). I’m fully aware I could change Amarok’s default behavior however the question is why is this the default behavior?. Even if albums arts were reduced to a reasonable amount the sheer amount of options and letters and icons on screen is overwhelming.

What about the currently playing song? I’m not saying that every repetition is a sign of a problem, but it seems reasonable that a clean well designed interface will have at most two instances, the current playing song marked in the playlist and the current song in the main interface. That’s it. Amarok is just showing too many (and one of them takes too much space). Even little things like Love on Last.fm and Add position marker are shown twice by default.

One of the coolest things about Amarok in the past is how aware it was of the internet, it helped you find new songs, metadata, lyrics and album arts. So the Amarok developers when making the jump to KDE 4 decided they will focus more on those features. This may seem like a good instinct but part of why it worked so well on Amarok 1.x was because those features were additions that didn’t take the focus out of the main function of a music player.

If I were to analyze the success of those features, regardless, I wouldn’t put the weight into how well designed the were but rather how “futuristic” they felt by making good use of new technologies available, we knew lyrics were online, so Amarok looked for them automatically, while other players at best showed us a blank page for us to copy and paste it, unlike most Amarok was aware of the internet and its capacities, that’s was one of the most attractive things about it.

Amarok’s context pane fails on both accounts, it totally misses the latest developments on the web, it seems unaware of the ongoing streaming revolution and it gets in the way of Amarok’s main function. It clutters the interface, it puts too much emphasis on the non-important things (e.g. the name of the song and album), it tries to fit more information than it can (multiple totally unintuitive “tabs”), including the ability to add more using a very weird ugly interface (which is meant to look like Plasma’s interface, as is built around it).

How does it get in the way? Well, there’s one more thing Amarok does differently than other players: Most show your library and playlists on a sidebar, you create new playlists by hitting an icon (usually a plus sign), then you go to your library and drag’n drop songs from your music to your new playlist. Not so on Amarok, here you have your library on a different panel from your current playlist (not your playlists), the way you create new playlists is by clearing the current playlist, dragging songs from the library to the panel and then hitting save playlist (this goes to show how unlike what some seem to believe Amarok’s style requires more steps).

However, that’s not a problem per se as it was a great experience on Amarok 1.x. I’m sure smarter people than myself could make it work out, however, the problem is it doesn’t work very well on the current Amarok and the context panel is right there getting in the way, drag’n dropping requires a longer movement as a consequence too. Its developers kinda recognized this issue so instead of fixing the problem they added, in my opinion, a pretty poor workaround:

Amarok became a big deal among Linux users because it was cutting edge and its playlist management was top notch, the cutting edge now are music streaming services. Not all of them have APIs available but many do, there’s no reason for Spotify not to be available, take a look a Tomahawk for a player aware of the future. Amarok merely keeps doing what it did ten years ago but arguably in a poorly manner compared to many of its contemporaries.

Yes, it’s possible to configure Amarok in such a way that’s more acceptable, but in many ways Amarok has  moved back not forward, for example, here’s a screenshot I took years ago of the playlist compared to the most recent one: So I hope KDE 5 is the time when Amarok developers take a deep breath and reconsider their priorities, I’m sure they can bring back the old-school Amarok playlist management, cutting edge features, and yes, keep the contextual information in a much more elegant functional way. My main recommendation is to eliminate the absurd amount of redundancy and reduce clutter as much as possible and to put the contextual information somewhere else.