Enlightenment desktop – Yes or no? 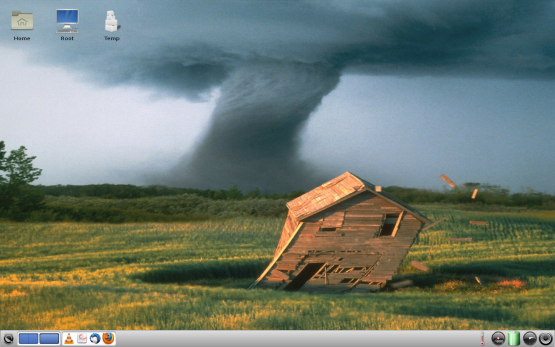 My experience with the Enlightenment desktop slash window manager hails back to 2007, when I started exploring distributions like openGEU and friends. Then, fast forward two years, I’ve had my first encounter with Bodhi Linux, which comes with E17 as its default desktop. Fast forward some more, and we enter the year 2013, with yet another review of Bodhi.

Half a decade ago, I was rather impressed with what the desktop could do. It managed a fair share of bling-bling, smooth transitions, shadows, transparency, and other cool effects, without having to rely on an expensive graphics card. It was all done in 2D. From the purely aesthetic perspective, E17 was not the best looking, but it was not bad, nor that much different from the contemporary rivals. But then, when I tested the desktop again two years back and just now, I noticed that little has changed in the visual phase space. Which brings a question, is Enlightenment a suitable desktop environment for modern machines?

It is important to try to separate distribution from desktop, which is why I deliberately did not choose Bodhi as the test platform, since it introduces an element of minimalism and customization that can affect the end result. Instead, I loaded the standard, default E17 framework from the official repository on top of Linux Mint Maya.

The installation was unspectacular and rather quick. The entire package weighed only 18MB, so it took just a few seconds to retrieve and install the environment. Log out and test the new session. On the first launch, Enlightenment will offer you some basic customization, including language and theme. I chose English, although Simplified Chinese is available too, and the default theme. Now, what do you see before your eyes? Enlightenment offers a plain, somewhat dark wallpaper, a handful of desktop icons, a bottom panel with its usual menu, virtual desktops, application space, and system tray, plus tiny, tiny icons. While this could have made sense back in 2007, it seems somewhat archaic in the age of modern, clear and crisp desktop environments. At this moment, it would be prudent to remind you that E17 made its first baby step a decade ago, and this is evident in the way it looks and feels.

Customization – Too much, too little

Let’s try to make Enlightenment friendlier and more accessible, somewhat like we did with LXDE several weeks ago. Indeed, this is a great opportunity to familiarize ourselves with the internals of this desktop environment, learn about its menus, settings and configurations, and get the system presentable.

As a veteran Linux user, you will figure out how to get things done. The system menu can be launched by clicking anywhere on the desktop, with either the left or right mouse buttons. Then, in the Settings category, you will find what you need. You can start the Settings Panel, which has pretty much everything, or fire up individual tools, like Gadgets, Modules, Shelves, Theme, or Wallpaper. Some of the names will be familiar, but other might confuse you a little. Modules and Shelves are the trickiest here, but we will get there. I began fiddling, and soon found myself swimming in a sea of options, some of which are arranged with all the ergonomic grace of a whale meeting a WWII depth charge in the North Sea. The power of Enlightenment is that you can edit EVERYTHING. The problem is that when you want to find the most common features, they are hidden among so many other confusing, obscure options. For example, take a look at the Gadgets Manager and Shelf Contents. Both seem to refer to same elements, seemingly, supposedly, and yet you have these different names, and the size of elements is every so slightly different. The Shelf Content also has the green light thingie, but the Gadgets Manager does not. Can you find an easy and totally logical explanation for this? Well, I surely cannot. A font, my kingdom for a font!

As someone of advanced age and peculiar taste in the size of written text, I found the Enlightenment default font size to be way too small and completely uncomfortable for use. So I tried changing the font size, only this did not matter much. Regardless of the font type and size I selected in the menu, the fonts would not change. Restarting the Enlightenment did not help either. At this stage, I was forced to invoke the powers of the Internet search.

Thirty seconds later, I learned that the only sensible way of changing fonts was to play with the scaling factor, which I did. Indeed, soon enough my fonts became large and readable. But the side effect of scaling everything was that now menus looked like a whale AFTER its fatal encounter with a depth charge. Elements were out of place, text overlapped everywhere, and the OCD demon in me was cackling with gleeful agony. Another characteristic of Enlightenment that compounded my frustration was the fact the file manager would launch with a tiny size of about 400x400px, showing large icons, so effectively, a directory listing was restricted to about three or four entries at most. Then, if I tried double-clicking on any folder, a separate window would launch, with no back and forth navigation. Burrowing through my folders created a mess of single-pane windows on my desktop. Instead of feeling focused and in control of my information, I was having a deep sense of disorientation. Slowly finding my way around

With yet more pain and extra Internet searches, I did gradually begin to get accustomed to Enlightenment and its peculiar behavior. I also found several top-rated themes and downloaded them, to see whether they could spice and improve the rather bland, too-dark default looks. Eventually, I found a really nice theme named Detour that offered large, clear elements with big fonts. Well, I was still clueless how to change the size of the window border, but at least Detour offered a significant amount of elegance beyond the archaic, early 2000s. After a bit more hard work, I managed to extend the bottom shelf across the desktop, and added several programs to the Favorites menu, which simplified the search, since using either shelf or desktop shortcuts is rather clunky. Enlightenment worked well overall, but it was not without fault. First, there was no network connectivity icon in the system tray, which, in my vocabulary, amounts to a decent-sized failure. Then, one time, the desktop failed to start the terminal window, or rather it did, alongside an error claiming the exact opposite, which can probably be considered a double bug. It also segfaulted once, or rather SEGV’d.

Finally, turning the compositing module on significantly slowed down the desktop experience. Smooth transitions became jerky and slow, with a noticeable lag. For some reason, Enlightenment struggled with the needed 3D acceleration or whatnot. This is exactly the opposite of what Cinnamon and MATE did, on the very same hardware.

All right, so is there an upside to all this? Well, yes and no. Enlightenment is a desktop environment designed for low-end hardware, which means your super-aging Pentiums ought to be able to run it without any problems. Then again, if you do have even a remotely modern machine, you will probably miss all and any performance gains and possibly suffer from some extra problems, like the compositing.

On my 64-bit box, with a dual-core CPU, 2GB RAM, Intel graphics, two SSD, Enlightenment tolled about 250MB, not that much less compared to my HP laptop with the Nvidia card. CPU usage was low most of the time, although compositing significantly aggravated this figure. Well, 250MB is a decent number, but it is not phenomenal or jaw-dropping or anything of that sort. It’s in the lower range of friendly desktop environments, comparable to MATE, Gnome 2 and Cinnamon. Another review of the Enlightenment desktop affirmed by belief and previous observations regarding its usefulness and relevance in the modern age of computing. Sadly, it just isn’t on the same level of quality and sophistication as some other desktops. In fact, it is far behind the competition. The overall look & feel is very old, the system management and customization is difficult, the user experience is severely lacking. While you can get a decent degree of aesthetics after a couple of hours of hard work, it will be nowhere near as dandy or stylish as other choices.

If you need a low-end optimized desktop environment, you are much better off with Xfce or LXDE. You will get the desired performance boost, alongside a well-designed desktop and application stack suited for networking and cross-platform usage. You will need not compromise, or reinvent the wheel trying to find your way around. Enlightenment might have shined once, but its glow is fading. But such is the way of the world. I guess the big problem was the lost decade, and the momentum that could have been, had E17 been released five years back. Perhaps then. But now? Well, no, not really.