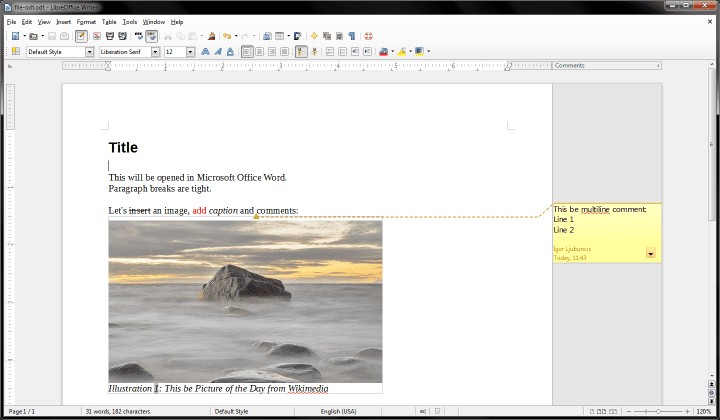 I would like to apologize in advance. This article is going to feature screenshots taken on a Windows 7 machine only, which might strike you as odd, given the fact this is a Linux-related topic we are discussing here. But it is exactly why we will use Windows. Nothing like pitch black to demonstrate pure white. Or the other way around.

Indeed, LibreOffice 4.2 has been officially released, and it’s a major one. This latest edition of the most popular free, open-source office suite comes with a range of new options, tons of speed improvements, a variety of fixes, and more. And there’s a promise of better support for Microsoft DOC/DOCX formats, which is the Achilles’ Heel of the whole typing world. Can you afford to ditch the expensive payware software and go Libre only? We talked about this in the past, and we will talk about this now.

We will start the exercise by creating a document in LibreOffice. A Writer document if you will, which includes some basic styles, some text markup, an embedded image with a caption, plus a comment with multiple lines of text. And when I say multiple, I mean lines with a solid break, not just overflowing text. The next part in the experiment is to save this file in a variety of formats, most notably DOC and DOCX. In real life, most people will be using some version of Microsoft Office to create their assorted documents, and when it comes to written text, Word is the de facto standard. You may not like it, but you can’t avoid it. Therefore, the most crucial bit in this test will be to see how well LibreOffice can handle the export and import of non-native file formats. And no less importantly, how useful and accurate these files are when opened in the proprietary rival software.

There were no issues with the binary files. Surprisingly, the fidelity of the conversion was pretty good, and Microsoft Word did not complain when trying to open the LibreOffice-generated file. All of the formatting was preserved, including the multiline comment, which used to be a tricky thing in the past. So progress, at last. Here, things were not so good. Trying to open the LibreOffice-generated DOCX file, Word simply stalled, churning a whole CPU core, but doing little besides. I was forced to hard-kill the process before I got control of Word once more, as well as its associated speed. While stuck loading this one naughty document, Word got really sluggish, and separate instances of the program crawled at a fraction of the expected responsiveness. Not a biggie on its own, or rather very much so, but it sure is a compounded effect of a much bigger issue I was dealing with.

In its moment of despair, Word wanted to send me to Office.com to try to open the file, because it was not able to interpret and use the archive created by LibreOffice. Looking around for a source of the problem, the only thing I could find was an application hang reference in the Windows Event Viewer, and little else besides.

I was not able to load the converted document, under any circumstances. Even when I renamed it, saved it the second time, or anything else. For that matter, opening the file inside LibreOffice also generated errors of its own. The image was not loaded, and the file was simply not usable. I thought there must be a problem with some of the formatting, so I created a second file, using text only, and then, adding an image into the body. Both opened well after being saved as DOCX files, and the overall layout was preserved. So there must be something with some of the rich fields, like comments, which are causing Word to go mad. But either way, this clearly illustrates the random magnitude of the problem that casual users could face when trying to open non-native formats in native software, and the other way around. If you try to save these would-be DOCX files, Word will tell you that it will convert the older format to a new one, where you might face additional risks of losing formatting or data. But it clearly shows that the generic 2007/2010/2013 entry in the LibreOffice Save As dialog is not good enough, and there should be separate entries for each of the three formats.

Now, in my previous article, I’ve shown you a better way about this – opening LibreOffice ODT files inside Word, as a workaround to massive problems demonstrated just above. This means you keep the native format, and then you rely on Windows people running Word to guess correctly and open your files inside Microsoft Office. While this does work to an extent, you start the adventure with a number of errors, all of which are debilitating, alarming and destined for failure.

First, Word will tell you the file cannot be opened, because there are problems with the content. If you click OK, it will ask you to recover the contents. If you agree, the file will load, with a relatively good quality of conversion. But the difficult part is to bridge the errors. The original ODT file is perfectly healthy, mind.

What you get is a decent sort of conversion, except some of the fonts are off, and the scale is not right. As you can see, the image caption is improperly aligned. It can easily be fixed, but it might also disqualify you from a lucrative job position, because someone might think your resume looks unprofessional, with mixed fonts and misaligned text. Using LibreOffice as an alternative to Microsoft Office is much like driving hybrid cars. It will work perfectly, as long as you restrict yourself to an odd 100 km commute, with a plenty of recharging stations along the route, and making sure you have a home kit. Otherwise, you’ll be left stranded. Same here. The conversion works, but it comes with a long list of disclaimers that is just not practical for daily use.

Yes, LibreOffice 4.2 is stunning fast, it’s much prettier, and it comes with a few handy tricks up its sleeve. It’s free too, and it’s a perfectly sane solution, as long as you do not intend to marry outside your village. Cross the border into another shire, and you face big trouble. The conclusion is two-fold then. LibreOffice is a great program for people who use ODT as their primary document format. And LibreOffice is still a terrible choice if you have to share your files with other people, most of whom probably use Microsoft Office. I wish the conclusion was happier, but the magical moment of LibreOffice dominance is still not here.