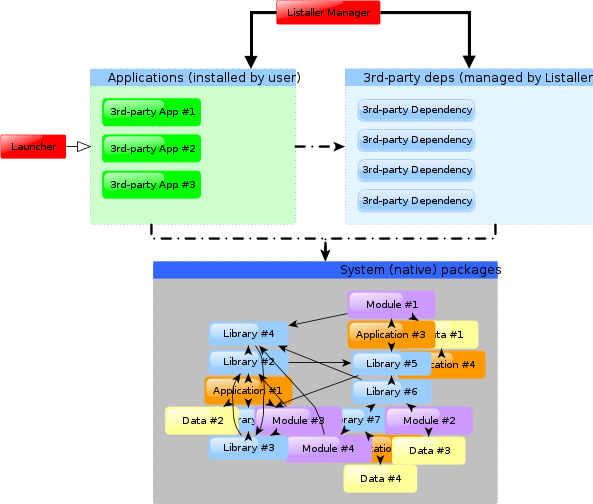 Listaller is a project that aims to replace the way people currently install applications. Specifically, its developers think adding repositories (for example, PPAs) to get a new application or the newest version is an overkill, it’s a security issue since it mostly means someone has full on root access to your computer.

To solve this, they’ve come up with a way to install applications  (low level libraries aren’t supported, i.e. you won’t be installing X with this) without requiring changes on anything installed using your system repositories. Their solution is simple enough: Apps installed by the user are dependent on 3rd-party libraries, those 3rd parties libraries are installed on a different layer (on top of your system layer) without making any changes to your system layer. The following images should make things clearer: If you want to test it out, you can download the tarballs from here or, if you want to know how irony tastes like, you can add ppa:ximion/packagekit to your repositories (it’s maintained by one of the developers themselves). Or you can hit the source for more information.