The hunt for the perfect distro 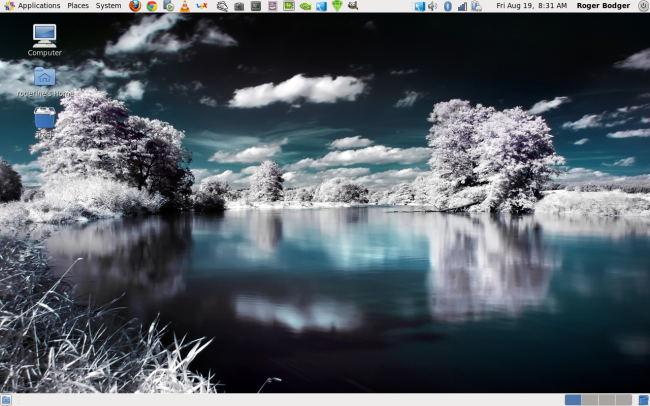 Do you know what this article has in common with the fairly popular book and film called The Hunt for the Red October? Well, nothing really. Except the word hunt. Now, let’s clarify a few things up front. First, there is such a thing as a perfect distro. You’ve seen me declare one or two before. However, that’s given our reality as it is, with limitations and whatnot. But what if there were none?

Second, as we explore this pseudo-virtual reality where anything is possible, I’d like to give you my take on what the perfect distro truly is. Not just in terms of how well packaged and functional it is, against the strict set of expectations, but also what it could be, if we were free to mix and spin as we please, defying the underlying problems that plague Linux these past two plus decades. In other words, if you could cannibalize systems for their best parts and slap them together to form a single uber-distro, what would it lool and feel and behave like. Frankenstein experiment, take one.

Arguably, openSUSE, KDE edition, is the finest looking Linux distribution on Planet Earth. It all started with the 12.3 release, and continues with the current, 13.1 Bottle version. The finest KDE implementation I’ve ever seen, with such a lovely composition of lines and colors that it leaves the poet mute. Now, this does not mean that other desktop environments and/or distributions using KDE cannot match this beauty. Yes, they can. But it will require additional effort, and by using mathematical induction, we can prove than any Linux distribution can be transformed into a gold mine excavator after n+1 iterations. So it’s not the matter of who can do what, after 11 hours of work, it’s who offers the best default scheme.

I’ve ranted a bit about the shortcomings of our favorite operating system in a separate article right here on Netrunner some weeks back. Installing any which system is a tricky process that requires skill and expertise and maybe even some luck, be it Windows or Linux. For most people, this is never an issue, because they buy their hardware preinstalled with some operating system, and they are spared the dilemma. However, if you must do it on your own, you want the procedure to be as intuitive and safe as possible, so you don’t lose any data.

When it comes to altering the disk layout and possibly ruining the data stored there, then openSUSE offers the most benign installation process, with a smart guessing logic where the root partition ought to be located, and where your data should go. The wizard also suggests a separate home partition, and it does not try to format it, if it knows there’s old data there. Now, you can still screw things up, if you try hard, but this is the least evil installer currently available. If you need to add and remove software to your system, then the Debian way of doing it is probably the simplest method. Whether you go through the command-line interface, using apt-get, or by playing with a frontend like Synaptic and many much-better looking alternatives implemented in Ubuntu and family, you’re better off than most other options. For a bunch of reasons, apt-get and friends is the most user-friendly way of managing software installations in Linux. It is the fastest implementation by far, even though it does not try all kinds of bandwidth optimizations like some others, and it does not prioritize repositories. Now, what I’d like to see is apt-get paired to RPM, rather than DEB, and this is what PCLinuxOS did, creating kind of the ultimate combo for package management. In theory, you can have any application installed on any Linux, more or less. It’s just a matter of downloading stuff, compiling stuff, hoping and praying a little when things get rough. However, why bother? Why not enjoy a simple and convenient and powerful set from the start? Much like the aesthetics part, you can go wild here, but in the default configuration, Linux Mint is the friendliest of the bunch. It’s not just the set of usual programs , like browsers, media players, office stuff, and such. It’s also all the rest: codecs, plugins, language sets, drivers, and other components, which comprise the necessary integral part of a good, healthy and pleasant desktop experience. The downside of keeping the interface compatible for all eternity and introducing changes and new programs with an almost paranoid slowness are offset by a total lack of problems, which you can often encounter on other Linux distributions. Compare the release cycles, if you please. The latest CentOS runs the kernel 2.6.32, released approx. four years back or so. Most contemporary distros are churning along with the kernel 3.9 or even higher. Take another example, Firefox. CentOS ships with the ESR edition, so it’s a year in between updates for you. The classic Gnome desktop is there, if you want it. Old school. There’s a definite benefit in having some of the latter, more modern stuff, but the bleeding edge of technology comes with a mandatory price, and it’s blood. Hence, the term bleeding. Still, you can have all the fun, but it takes some effort. In my ideal world, all distributions would have the CentOS-like stability. This would mean slower progress, of course, and fewer release cycles. Going live every six months and then supporting your software for mere nine is brutal. There’s hardly any time for proper QA, and this shows.

Now, the tricky question, what do you base your system on? I’d say RedHat. It’s not that the rest are inferior from the technological perspective, it’s just that it makes most sense. It’s the by-the-book implementation, and no mistake, and it’s what you want for work, and it’s what you don’t care about at home, but it’s still good knowing that your system is embedded in logic.

Then, there’s the matter of support. Ideally, you change operating systems when you replace your hardware. Until recently, Linux offered limited home support that only started changing with Ubuntu LTS editions, which had extended from three to five years. RedHat still gives you a whole decade more or less, much like Microsoft, and you get the same from CentOS. Boring you would say? Not good enough for your home environment? Well, once upon a time, I may have thought so, but then, if you look at a distro like Fuduntu, it proves (proved) that you can have immense fun even if you run RedHat underneath. Well, Fedora, but it’s the same thing. More or less. Who said RedHat cannot be exciting?

There you go. The ultimate distribution runs on RedHat code, but it uses Debian’s package management, it’s probably flavored with KDE from openSUSE, and it borrows its installation wizard. Moreover, the stability comes from CentOS, and the applications are taken from Linux Mint. A bit of everything.

It makes sense. If you think about it, it’s relatively easy to find faults with all of the distributions above, for the simple reason that they took the Linux core and then forked in their own direction, burdened with their mission statement, ideology and other constraints. Now, if we could somehow bring them all back together into the fold and start cross-breeding like a happy bunch of sheep on steroids. The end product would truly be the ultimate distro that is the best in every sense. The only problem would be the name. The distribution would be called openCentHatMintian. And we’re done.