Marble is not just a rock, it’s software, too 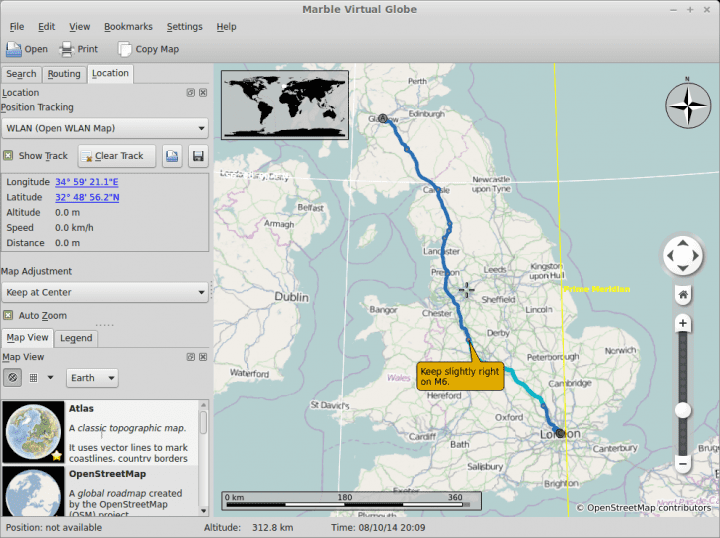 Marble, the one we are referring to here, is a free, open-source world atlas and virtual globe software somewhat akin to Google Earth and friends. It is also a part of the KDE software suite, which makes it even more interesting. Now, it’s no stranger, either, and we have seen this little tool in action a few years back.

I decided to re-explore [sic] Marble once again and see what it can offer, especially now that version 1.9 has been released. Sadly, the new build is only available for Windows at the moment. Ironic, is it not. The version present in most distro repos is still held back at 1.8, but that ought to be enough. I did run the new edition in Windows 7, for comparison’s sake, and I could not see any huge changes, so we will have to do with a slightly older version. Follow me.

All right, once you install Marble and launch it, it will display Earth using a classical topographic map at about 6,000 km distance. You can zoom in, rotate the planet, and change to different map view types. If you are online, the program will automatically download additional map data, pretty seamlessly. You can also download new map views. For instance, in addition to climate, political and historical representations, you might also like to see the oceans and precipitation or something else entirely, or even explore other planets. Recently, Marble has expanded its library to include most of the rest of the Solar system, which is quite cool and intriguing. The really interesting part about Marble is that you can also use it as a free navigation software. And this is the one part that highlights all the brilliance and faults with the KDE software framework. You take a great concept, you develop it partially, and then you stall. In this particular case, Marble had voice-assisted real-time guidance and navigation for several older Nokia phones back in 2010. And supposedly, the team has also been developing Android and iOS port, which sounds awesome. However, the simple reality is, the desktop version is the one with most focus and features, but it lacks the real-time positioning and feedback to make it into a proper navigation software. How’s that for bi-polar disorder, the Janus man syndrome, the split personality thingie?

But not all is lost, mind. Indeed, with the existing subset of features, Marble is still a pretty good piece of software. When you combine all its magical powers, you get a very rich and useful interface. And if your machine does happen to include a GPS module, it could work great in the urban setting.

You can setup routes with two or more waypoints. The software will do its best to calculate the best path for you, based on your selected algorithm. Are you going by car, do you want the fastest or shortest route, and so forth. Then, you will get a detailed list of directions that will take where you need to go. If you switch to the Location tab, then you can also monitor the route and your progress, as well as auto-zoom and keep the map pointer centered on your current location. When it comes to position tracking, Linux is much more powerful than Windows, because you can easily install all those missing features and tools. You need gpsd or monav? No problem, fire up your package manager and install them. No great fussing. Of course, it takes time and actual practice to determine the best method to get from one point to another, and the abundance can be a little daunting, but you will probably manage fine. Still, a single, well-proven system would work better, even though no one navigation tool is perfect.

After a while, you will start getting the hang of it. If you punch in coordinates that cannot be easily planned, the system will complain about no routes being found, but it will still give you directions. For instance, going from Glasgow to London via Gibraltar is a no-go, it seems, but then, why do I get the directions? Yes, it seems the software ignore my plea for a visit farther south, and just plotted the A-C route. Not bad, but it can be confusing if you’re not savvy on software and its weird tricks. Like I’ve mentioned before, you can do a sort-of virtual drive down your route and animate your progress. There are many ways to do that, including FlightGear, but you will have to have the game installed and configured. It gets geeky and steps away from the realm of normal people, but then, it’s rich and fun. To keep it simple though, OpenStreetMap plus Open WLAN Map seems like the best combo to get from one point to another. Marble has a very rich interface. The list of options is long, especially for the navigation part, and there are tons of plugins. Some are configurable, some are obscure, and some are missing, like the voice guidance for the desktop version. But there’s really quite a lot of it, and you will need to spend some time learning how Marble works deep under the hood. For offline work, you can download regions and maps, so you do not depend on real-time feedback. This will also give you additional routing options for when you need to go from one point to another. If you wanna cycle or maybe walk, there’s a pair of options, too. Beyond the exploration of maps on this planet or others and fiddling with the navigation module, Marble is also a decent educational tool. You can right-click on any point on the world map, get new directions, add bookmarks, or learn more about what’s happening, with Wikipedia information displayed right there. This is a great thing for children, who might have a liking for geography. But adults can also have their share of fun. Five years down the road, Marble feels and behaves quite similar to its 2009 incarnation. On one hand, this is a good thing, a sign of brand recognition and self image. On the other, the software should have made additional progress since, in becoming slightly more abstract, with fewer menu options and tweaks, more portability, and a much more powerful navigation module. This is one of those things that could spearhead the KDE adoption on mobile devices. Not trivial but doable.

Overall, though, my dreams of KDE world domination notwithstanding and the pending Plasma Next release itching in my bones, Marble is a very decent program. It has its share of niggles and woes and an occasional crash, but it works well, it’s fairly reliable, it has a rich and useful interface, and it offers a decent blend of geography, politics, trivia, and pure and simple Robinson Crusoe exploration fizzle. The navigation part is its strongest and weakest link, and I hope there’ll be an Android port coming soon, which could really transform Marble into a worldly beast. Anyhow, you ought to take it for a spin. It’s free.