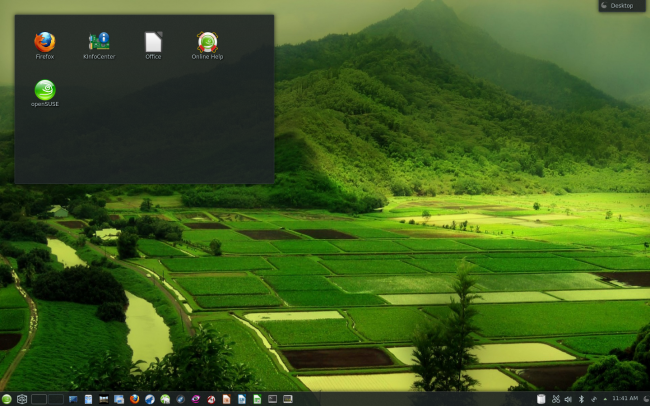 Like the laws of physics tell us, for every article, there’s an equal counter-article. Indeed, it is time to complete the battle royale started last week. In the first piece, we compared KDE and Cinnamon, arguably the two leading desktop environments in the Linux world, from the perspective of the former, in terms of what it can learn from its younger rival.

Previously on Star Trek … I mean Netrunner, we saw that Cinnamon benefits from a jolly nippy development speed, both because of its age and size as a project, a tightly knit sense of belonging with the user community, and some extra layers of granularity in terms of control and simplicity. So far so good. And now, the conclusion.

Cinnamon is a Linux only desktop environment, and it will run happily as long as you have some form of Linux beating under the hood. Technically, it ought to run on any UNIX-like operating system, graced with the X Windows or similar, but for now, the availability is limited. On the other hand, KDE is a truly cross-platform solution, with the framework available on Solaris, FreeBSD, OSX, and even Windows. This means that people pondering the use of KDE could test and explore its various options, tools and programs before fully migrating. This is a significant advantage, especially among Windows users, since they are not that accustomed to using live media for software evaluation. You might argue that very few people would exercise this right. Then again, you can look at the problem statement from the opposite side. If you’re a devoted KDE user, you can maintain the full and familiar stack across the board, without having to compromise on the tools you use, regardless of which operating system you choose. A rhyme. Now, lo and behold, Amarok on Windows, like a boss. The same goes for pretty much anything KDE. Quintessentially, KDE is a German idea, so to speak, which is why it is so meticulous and tidy. There’s beautiful order and almost paranoid attention to details imbuing the framework, almost on an atomic level. Everything fits everything else, and you get a solid sense of smooth, calm, sharp, and elegant, all the same time. True, some distributions sin the sin of underplaying the inherent beauty of the desktop, while others celebrate it. For example, the KDE implementation in openSUSE 12.3 is one of the more refined examples out there. But you will not go wrong with any one. Choose whichever distribution you fancy, and if it runs KDE, you will have a solid, familiar behavior, as well as the expected precision. It all comes down to tiniest details, even your ability to control the system area icons visibility, much like in Windows. Then, you might also want to configure gestures, shortcuts, or anything else. It’s all there. KDE desktop is not just a layer upon which you run your software; it is a complete stack, bottom to top. No matter how deeply you search through the menus and options, the KDE-ness persists. The downside of this approach is the relative complexity and exposure of pretty much every single option to the user, as we have seen last week, however, the big upside is that you maintain commonality and functionality everywhere. Moreover, you do not need to leave the comfort of your desktop environment to search for additional content and supplemental software. For example, even the installation of new themes and decorations can be achieved entirely through the system settings menu. The same goes for fonts, tools, and everything else. Desktop effects are also tightly integrated into the framework, adding to the professional feel. Wait, what? True, any Linux distro can run any which application. It’s just the matter of having the right libraries installed, and perhaps not having the best, most optimal looks, because sometimes, software designed for a specific desktop environment can look weird when executed elsewhere. But in general, for you can run KDE programs on Gnome or Unity or Cinnamon, and vice versa. No worries.

However, if you examine the KDE stack, it comes with the most complete, most uniform application set out there, non-Linux operating systems included. The K-mantra that fanatically dictates the naming convention also governs a very robust, very complete world of functionality, including system tools and utilities. Cinnamon chiefly uses Gnome stuff, and there’s a a kind of discipline there, but there’s no uniformity, no higher structure to the software stack. With Cinnamon, most of the time, the system menu choice will depend upon and reflect the particular distro developers bundling their favorite set. Which means that if you move from one Cinnamon to another, you could undergo a drastic shift in experience. With KDE, you will get a consistent behavior, and this can help users grow a sense of identification and belonging with the desktop environment. Not that you should have any emotions toward software, that would be wrong.

KDE programs are well-known for their highly detailed menus and options, which may deter some people, as we have outlined in the first article. On the other hand, the richness has its perks. No matter what KDE application you choose, it has its joy box of extra goodies. Send your photos to Flickr or Facebook, no problem. Connect to your iPod? Not a biggie. Samba, NFS, online cloud storage, you name it. Like it or not, arguably, KDE has the most professional feel of all Linux desktop environments, when you combine the applications availability and their richness, the full vertical stack of tools and options, as well as the extremely consistent behavior. Even though the tidiness can be construed as slightly boring, it sure delivers in the long-run, as you know what to expect from your software from one version to another.

The potential for growth is also quite large. Underneath the bold KDE heart beats Qt, and this means, one day, we may see more and more of this framework on non-desktop computing devices, including netbooks, but maybe also tablets and smartphones. The bold era of KDE dominance is still ahead of us, in the misty future, yet if one has to choose, then one would be quite wise to opt for KDE as their fertile ground for development.

KDE is a far more mature, more complete desktop environment, and this is evident in several core areas, like the cross-platform compatibility, as well as the full-grown, extremely powerful and autonomous stack of applications, tools and options, sprinkled with a healthy dose of class and professionalism. The young and growing Cinnamon desktop would do well to emulate its elder rival in some, if not all of these aspects.

Again, you will not go wrong with either choice, especially since there’s no technological limitation in having both desktop environments installed side by side on your desktop. If you’re looking for a more refined and holistic experience, you might want to choose KDE. Likewise, if usage transparency is important for you, you will definitely prefer KDE over Cinnamon. Finally, no matter what the young blood can do, there’s no denying the solid maturity and laid-back style of the well-polished, smooth and highly aesthetic KDE desktop environment.

And so we come full circle. The match is over. Party on some more.